One was brunette, so was the other

They met in Sardinia in 1991. They began working together later the same year, first in radio studios, and then in the production of docu-films for Rai.

As trees, one is pittosporum, the other an elder

The authors stand out for their use of innovative communicative codes to handle major social issues, foremost among which is the condition of people with disabilities.

As vehicles, one is a lilac Vespa, the other a pink Renault 4

Over time, the initial subject matter expanded and the authors explored new paths into the narration of reality, focusing their attention on stories of relations and on testimonies.

As singers, one is Aretha Franklin, the other is Patty Smith

The commitment of the moment is Lunàdigas, its distribution and the growth of the community, with which so many women who have chosen not to have children identify.

As wines, one is Marzemino, the other Vermentino

Setting out from their personal condition as women without children, the authors embark on investigation and introspection into the reasons for a choice that is never easy, rarely discussed, and often hidden.

As women, one is clitoral, the other vaginal. And vice versa

From their interior journey to their travels around the world to meet lunàdigas women from other cultures and explore their vision of maternity.

Nowadays, one has grey hair, and so does the other

The authors: Read a complete profile on Wikipedia 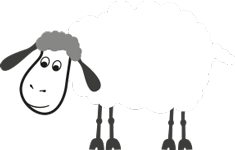